As a young black (female) climate advocate/activist, when seeking others involved (locally, nationally and globally) who looked like myself, it wasn’t always easy.

Welcome to our guest blog written by Zain Kwabi-Gibson.  Zain is an active member of the UKSCN (UK Student Climate Network). The UKSCN is a group of mostly under 18s taking to the streets to protest the government’s lack of action on the Climate Crisis

I questioned whether I was living under a rock, just not knowing of many black activists and sustainable bloggers, or if they just weren’t able to achieve the same visibility as their white counterparts. Though at the end of the day the climate justice movement (and sustainability) is for the good of all – and anyone fighting for the environment is important and valued, it can often make these spaces feel uninviting, leaving questions as to whether black and POC folks aren’t welcome into these spaces or why they haven’t been able to integrate into them.

Climate activism and the sustainability movement have been predominantly presented as white led. Many things considered “revolutionary” within the movement have often originally been pushed or utilised by black and POC activists and communities throughout history. Just one example you may or may not have heard of would be a Miswak twig, used in many black and POC cultures as natural toothbrushes.

“…it can often make these spaces feel uninviting”

When attending local meetings and actions, online and in person, I have felt and noticed being either the only black person or one of few. I’ve often rationalised this with myself as being due to where I live (North Hertfordshire) but even on a larger scale throughout the UK, there is often a similar issue.

African climate activist cropped out of a group photo at DAVOS

A somewhat recent reminder of how black and non-white people find themselves treated within climate justice movements was the instance of Vanessa Nakate. Vanessa Nakate is a climate activist from Uganda. When attending a joint press conference alongside other climate activists, she later saw she had been cropped out of a published group photo, leaving only her white peers in frame. Moments like this remind black activists that their presence is still often considered unappealing on the frontlines, how even subtly some people and organisations are willing to push us out of the fight side of the movement, acting as solely as the vision of those who need saving. This further perpetuates an idea of “white saviourism”, in this case that the planet is being saved by white people.

The climate crisis disproportionately has, is and will affect what we call “the global south” more than “western countries”.

Around 90% of carbon emissions are produced in the west, disproportionately affecting the global south who produce only 10%. 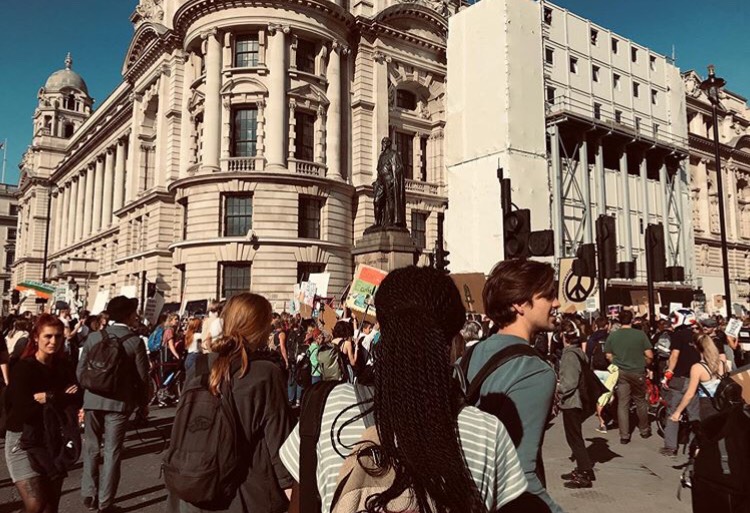 I can understand why my fellow black friends (who aren’t involved in climate activism) weren’t on board with a lot of the movements they would see online. The media consistently showed (and shows) it to be a white and largely middle-class thing, with some activists willing to be arrested. However, when Black and POC people make up 14% of the UK’s overall population but 25% of the prison population, of course this representation impacts some aspects of people of colour involving themselves in some regards of activism. In Hertfordshire alone you are 5x more likely to be stopped and searched by police if you’re fit within the BAME description.

“Climate change is a social justice and racial injustice issue”

Climate change is a social justice and racial injustice issue. Black, Indigenous and non-white people have been fighting for climate justice, land security and other climate related injustices for many years. In the UK We have seen how our waste is  exported to “developing” countries for them to deal with. Clothing and many of the items we use or have become reliant on using daily are still being largely produced by the exploitation of people of colour; the far lower prices that result make choosing “ethical” consumption a niche.

“..European colonialism and its impacts (past and present) on “the global south” must be acknowledged and addressed.”

I’ve never let the fact that I’m black stop me from speaking about climate justice, given that my family heritage links to a small Caribbean Island I know this fight is personal too. Climate advocacy cannot be sustainable if we ignore the multitude of links to its cause. Moving forward within such movements, European colonialism and its impacts (past and present) on “the global south” must be acknowledged and addressed.

This cannot and should never be treated as a movement seen as “deprived” nations seeking helping white hands, rather we must listen and make space for those on the frontlines experiencing the climate crisis. Rather than saviourism, white activists must learn how to assist and make space for black and POC voices. Here in our little spot of Earth we call Hertfordshire, we must not seek to fill spots with black and non-white folks; our presence isn’t a badge to say “well done you’re inclusive!’ Instead as a community we need to find ways to reach out to all people and dismantle the idea that climate advocacy is reserved for white voices.

If you’ve realised you want to expand your activist bubble, here are a few black activists and POC sustainable bloggers to check google and where to find them on social media:

@blackpeoplegrow (Instagram) sharing black people who grow their own food.

View all posts by gf